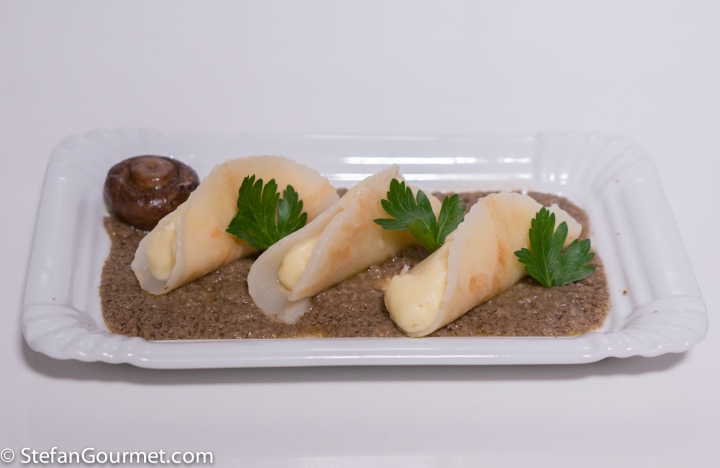 This vegetable appetizer was inspired by a dish we enjoyed at Casa Velha in Portugal a few weeks ago, though it is certainly not a Portuguese dish. I liked the idea of using thinly sliced celeriac (celery root) instead of pasta, but I thought it was a shame that the mushroom broth was so thin that it did not ‘stick’ to the ‘ravioli’. And so I decided to make a mushroom puree instead. I also left out the roasted almond and added some white wine to the mushroom puree for some freshness, so in the end this is really a different dish. It is delicious and very flavorful, especially if you consider it is vegan. It uses few ingredients and is easy to prepare. The most difficult step is to slice the celeriac very thinly. I chose to cook the celeriac and parsnip sous-vide to best preserve their flavor, but you could certainly steam them instead.

For 4 servings as an appetizer

You will not need all of the celeriac, but there is a risk that there are holes in the center so it is safest to have plenty. The remaining celeriac can be used to make celeriac puree, using the same procedure as the parsnip puree in this recipe. 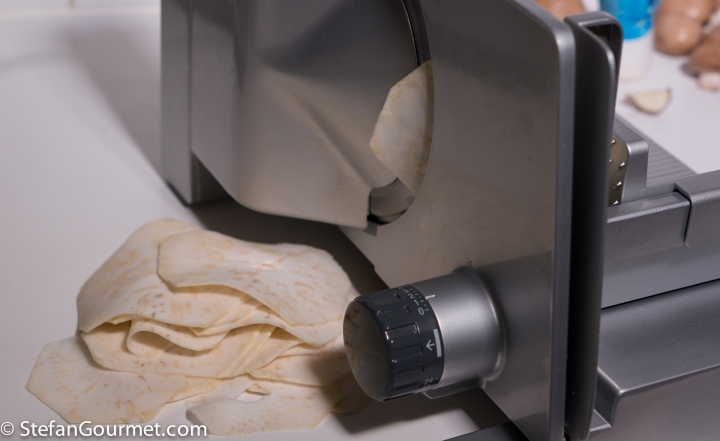 Slice the celeriac very thinly. I used a slicing machine, but a mandolin would also work.

Use a cookie cutter to cut nice even circles out of the sliced celeriac, selecting slices that are large enough and without holes.

Peel the parsnip and chop roughly. 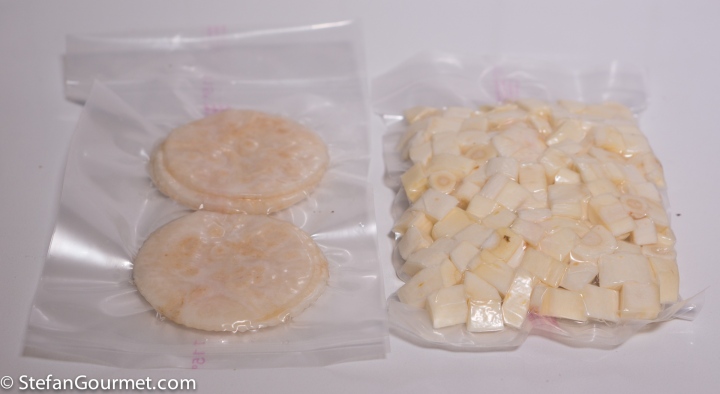 To cook sous-vide, season the celeriac and parsnip with salt, vacuum seal them separately, and cook them for 1 hour at 85C/185F.

You could also steam the celeriac and parsnip.

Meanwhile, prepare the mushroom puree. Sautée the sliced mushrooms and whole mushrooms with the minced garlic in 2 tablespoons of extra virgin olive oil.

When the mushrooms are nicely browned, add the white wine…

…and allow to reduce by half. Puree the mushrooms with an immersion blender, adding a bit of water if needed to obtain a smooth puree. Season to taste with salt and freshly ground black pepper.

Puree the parsnips with 2 tablespoons of extra virgin olive oil in a blender or with an immersion blender until smooth. Season to taste with salt and freshly ground black pepper.

To serve, spread out a layer of mushroom puree on preheated plates. Stuff the celeriac with parsnip puree like a taco. Garnish with parsley and the whole mushrooms.

This is nice with a light dry white wine, such as a Soave.

Fish can also be paired with red wine, especially if it is served with a red wine sauce such as this turbot.

3 thoughts on “Celeriac ‘Ravioli’ with Parsnip and Mushrooms”