This post is coming from you from the middle of the IJsselmeer, the largest lake in the Netherlands. With a group of 25-30 people we are camping on a small fleet of boats (two large ones, plus several smaller ones). Everyone has a task on board, and it won’t come as a surprise that I am the chef 🙂

This means freshly baked multigrain bread every day, on the first night freshly made shawarma, and on the second night we roasted a whole suckling pig over an open fire.

Let me show you my kitchen on board before I tell you what we did with the piggy. 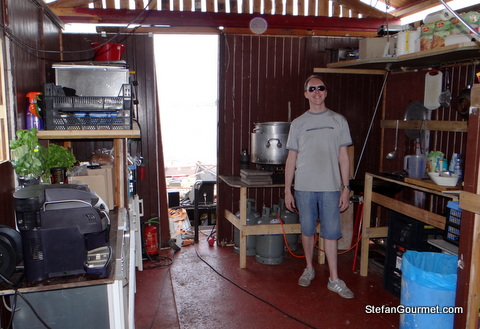 Kees and I own a 20 meter (66 ft) barge. On top of this a shack was built that is our kitchen and bar. As you can see the shack has natural ‘air conditioning’, perfect for the 22C/70F weather we are having. 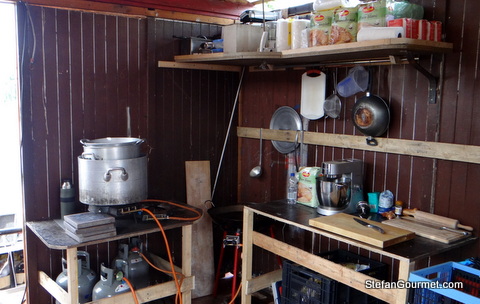 Of course I brought my sous-vide cooker, but you can’t see it here because it’s up on the shelf. For such a large group a large pot is needed. The paella pan in the corner is also very useful for pan frying.

One feature of this kitchen that is even better than what I have at home is the pizza oven that goes up to 500C/900F and requires 380 volts power (which we do have on the other boat but not at home).

Another nice feature is that at least a dozen of the other guys on board are quite handy and eager to please the chef. So when I ask for a nice rack to allow the freshly baked bread to cool off, this is what I got within 10 minutes!

I like to share my love for food, and this trip is great for that as I’m showing my fellow passengers how nice food can taste without ketchup and the like. For the suckling pig I decided upon a very basic brine (salt, sugar, and water) and a stuffing that was inspired by Richard’s Christmas suckling pig: apple, fennel, onion, and garlic.

I used a technique called equilibrium brining. Rather than using a traditional brine of 1 cup salt per gallon of water (which has a salt content of almost 3%), I calculated the exact amount of salt to end up with a salt concentration of 1% in the piggy. If you allow the piggy to brine long enough (24 hours), the salt will be evenly distributed in the water and all through the piggy. The piggy cannot become too salty by leaving it in the brine too long, because when the equilibrium has been reached the salt concentration will be 1% in the piggy as well as the brine.

The math for this is quite simple. I needed 20 liters (20 kilograms) of water to cover the piggy. The piggy itself was 10 kilograms. So the total weight of the piggy and the water is 30 kilograms. 1% of that is 300 grams. The brine also needs sugar at a rate of 0.4%, which equals to 120 grams of sugar.

Since we don’t have a refrigerator on board that is large enough to hold the container with the brine and the piggy, I decided to allow the piggy to defrost in the brine. I tried this before with chickens, and this time it also worked like a charm. I used some frozen coolers to regulate the temperature, and monitored the temperature to make sure it remained below 5C/41F. After 24 hours the piggy had defrosted and was brined.

We stuffed the abdominal cavity of the piggy with the stuffing.

Then we sewed it with metal wire because that’s what we had rather than butcher’s twine.

We stuck a metal rod through the piggy.

We built a moderately hot fire with the glowing embers on both sides of the middle part to avoid flare ups from fat dripping from the piggy. 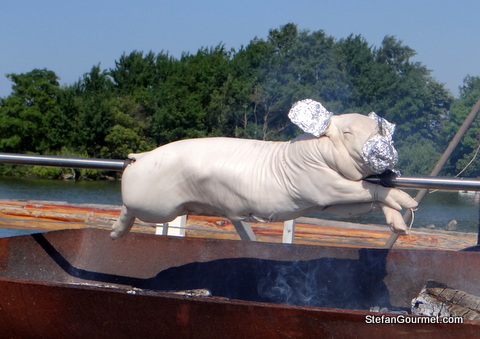 We trussed up the piggy with some metal pins and more metal wire, and wrapped the ears with aluminum foil to prevent them from burning. The trussing could have been done more neatly, but this was the first time I ever did this and in the end it didn’t make any difference in the end result.

One of my friends on the boat made a rotisserie with an electric engine he had in his boat somewhere, and we let the piggy rotate at about 2 rounds per minute.

After about half an hour over the fire, I rubbed the piggy with olive oil. We kept roasting it, monitoring the fire, until the skin was crispy and a deep golden brown, and the core temperature reached 60C/140F for medium.

The piggy was gone pretty quickly. I didn’t take any pictures of the carving, because I was doing the carving and feeding pieces of the piggy to my friends who were waiting in line (and coming back for second and third helpings). Everyone loved it and was amazed at how much flavor it had, how juicy it was (thanks to the brining) and how the different parts of the animal all had different flavors. My favorite pieces were the more fatty parts on top of the shoulder, although the tenderloin was also outstanding.

This is definitely something I’ll do again if I have a crowd to feed!

19 thoughts on “Suckling Pig over an Open Fire”