Pecan Pie is a classic from the Southern US, and for good reason because pecan trees are native in that region (as well as Mexico). For this post I didn’t bake a traditional pecan pie, because I made three changes:

By zooming in on the crust, you can see that it is very flaky indeed. I saw this method on SeriousEats and was curious to try it. I am glad that I did, because it actually works. The usual way to make pastry is to mix butter with flour until there are still pea-sized pieces of butter, and then add a bit of cold water until the dough comes together. In this new method, first butter is mixed with two thirds of the flour until they are completely mixed. Then the remaining flour is folded in. Also, the amount of butter is substantially higher. The resulting dough is much easier to roll out and work with, as it doesn’t tear as easily. The fact that it is easier to work with, means that the additional steps will yield a good ‘return on investment’ and in the end I don’t think you’ll spend more time. The only drawback is the additional use of butter. As Kenji doesn’t mention this as a key part of his method, I’ll try it with the usual butter-to-flour ratio of 1:2 next time I’m making a pie or tart. Stay tuned for the result of that experiment. For now, let’s go to the recipe for pecan maple squares.

butter for greasing the pan

For the pie crust

Instructions for the pie crust 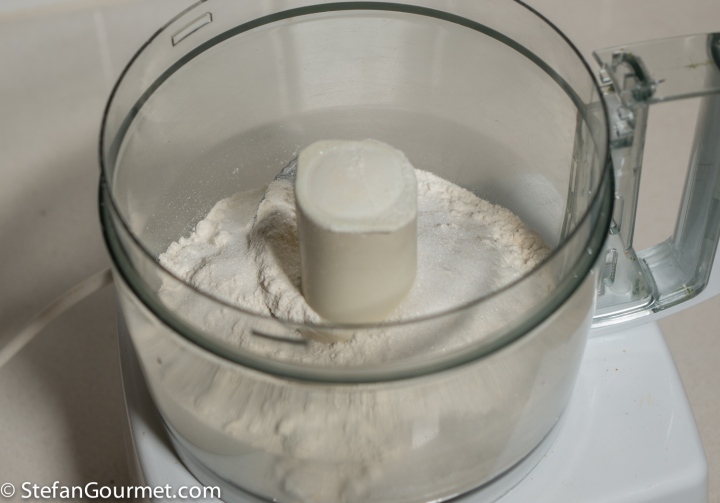 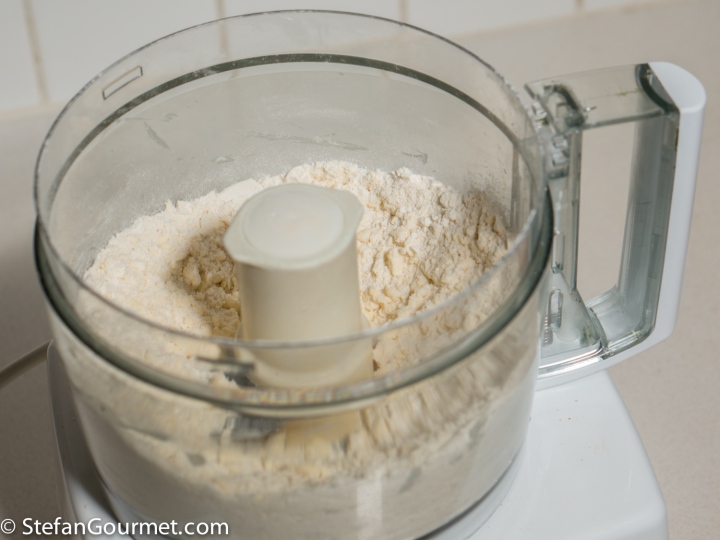 Process, but do not stop when the butter has been reduced to pea sized. 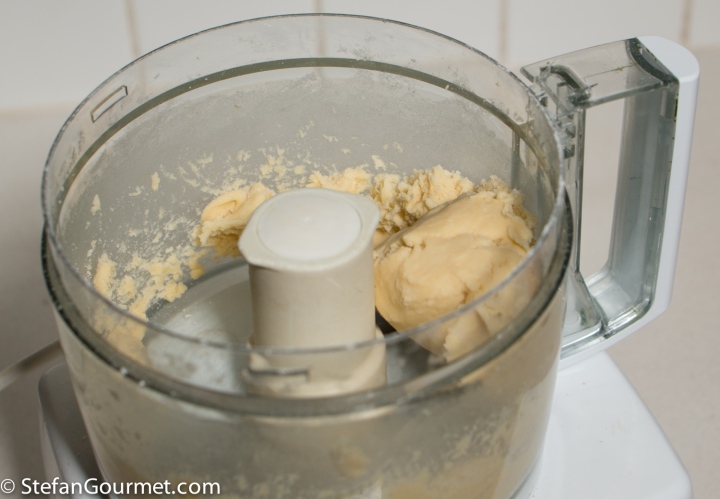 …until the dough has come together.

Spread out the dough with a spatula.

Sprinkle on the remaining 60 grams (6 Tbsp) of flour.

Pulse a few times until you have large crumbles covered with flour. You should still be able to see the flour. 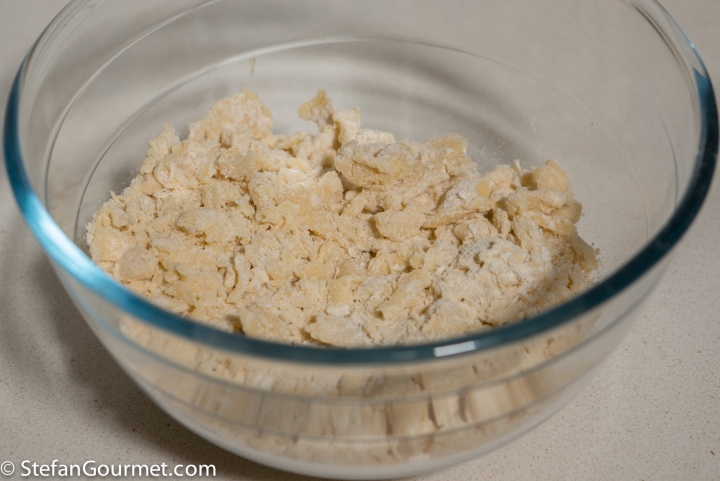 Transfer the crumbles to a bowl. 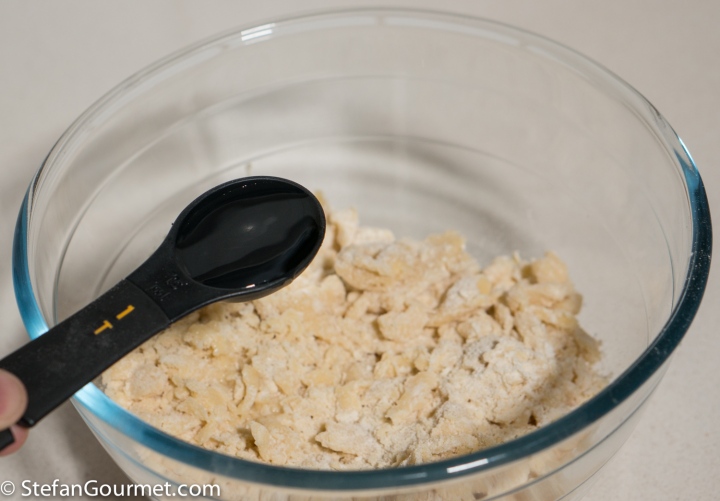 With a spatula fold in the water… 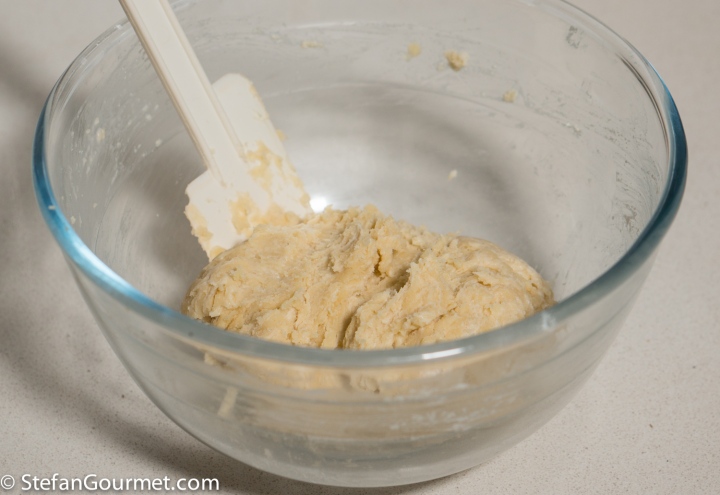 …until the dough has turned into a ball. 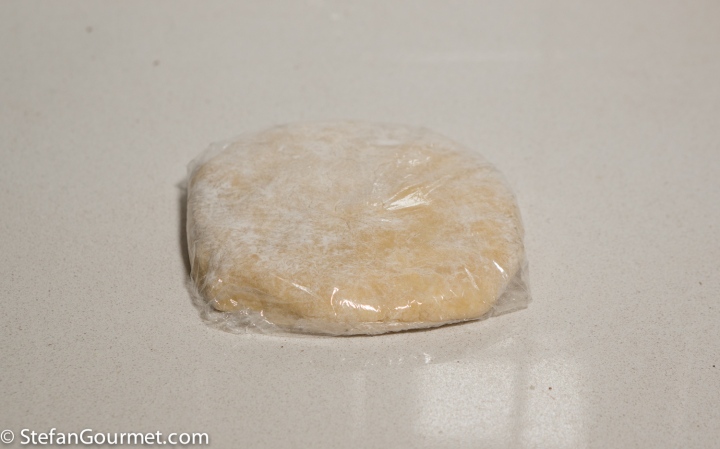 Flatten the dough into a disk on a floured work surface, wrap it in cling film, and refrigerate for at least 2 hours. 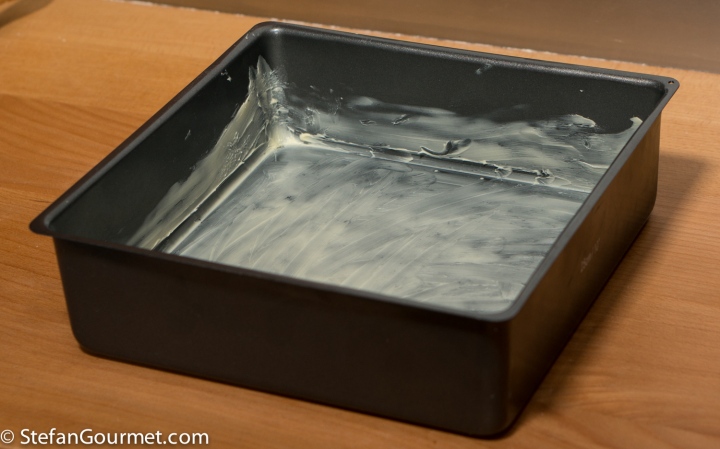 Take the dough out of the refrigerator and unwrap it. Put it on a work surface that you dusted with flour. 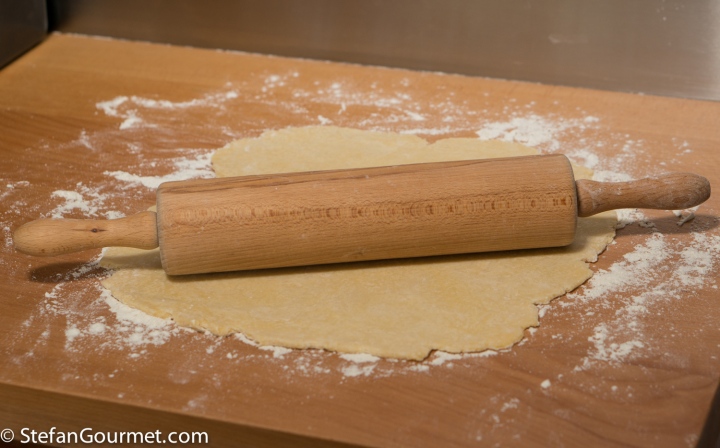 Roll out the dough to a square of about 25 cm (10 inch). To get a square shape, roll more on the diagonal than on the other directions.

Transfer the dough to the brownie pan. 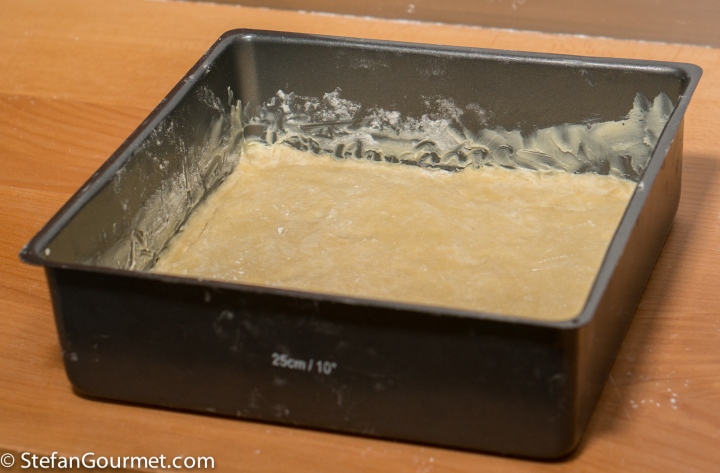 Trim the edges and use them to fill up any holes along the sides. Reserve the trimmings by rolling them up into a ball, wrapping the ball in foil, and refrigerating it.

Fill the pan with pie weights (ceramic or beans). 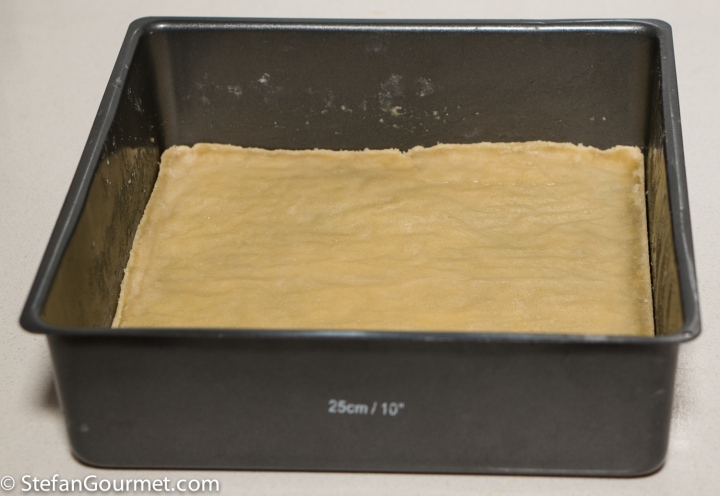 Bake like this for 15 minutes at 190C/375F, then take it out of the oven and remove the pie weights and the oven paper. 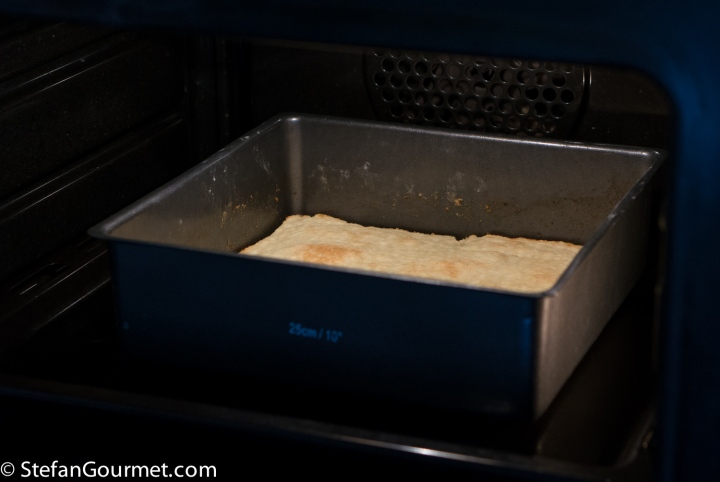 Return to the oven and bake until it starts to color, about 5 minutes. The process you have now completed is called “blind baking”. It helps to keep the pie crust crispy when you bake it later with a moist filling. 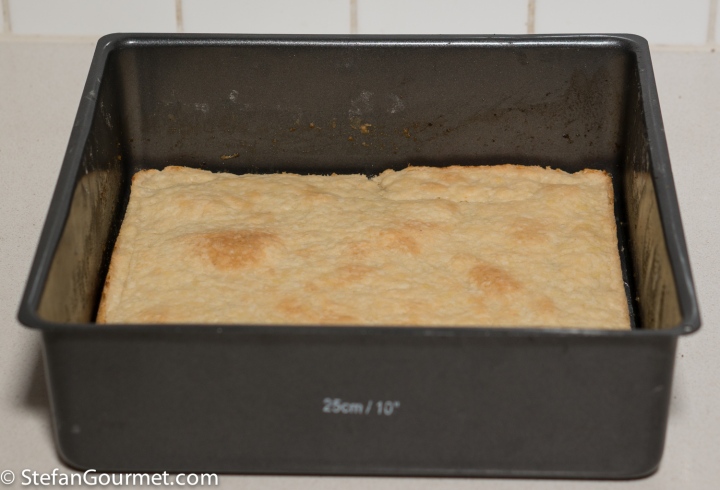 Allow the crust to cool while you make the filling.

In my case the crust had shrunk somewhat (perhaps this could have been prevented by refrigerating the crust in the pan for an hour or so before baking it). I used the reserved trimmings to fill in the gaps around the edges. 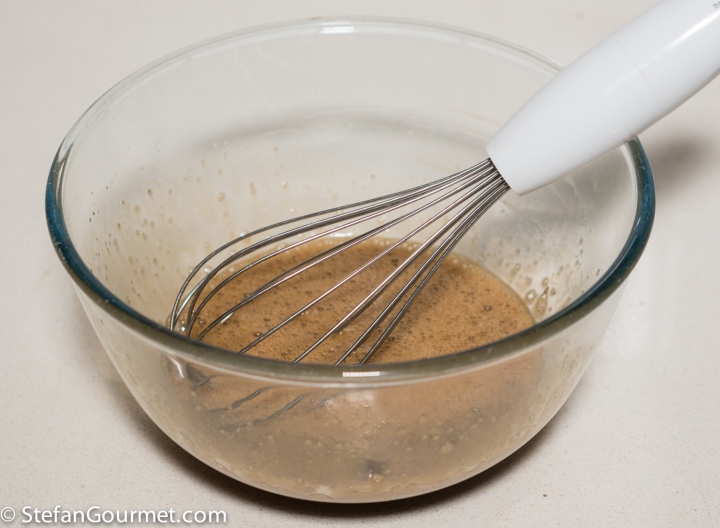 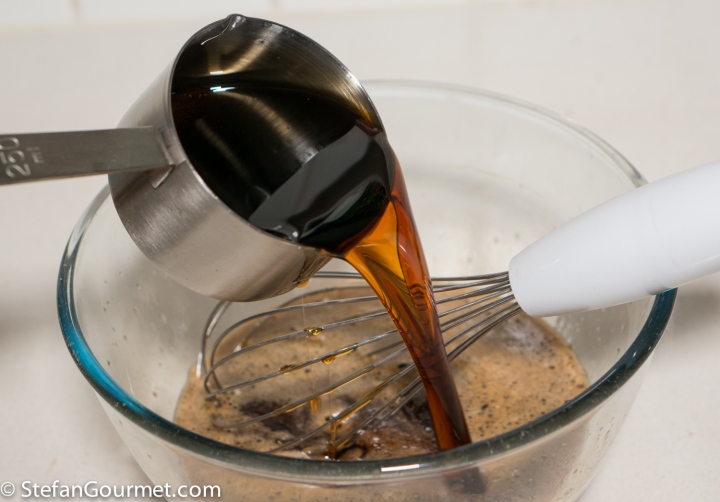 Roughly chop half of the pecans (I used 2/3, but ended up not having enough of them left to completely cover the top) and arrange them in an even layer on the crust.

Make sure to reserve all whole pecans for the top (so use the ones that aren’t whole for chopping).

The chopped pecans may float a bit, that is OK.

Gently arrange the whole pecans on top. Do not push too hard on them to prevent them from sinking. 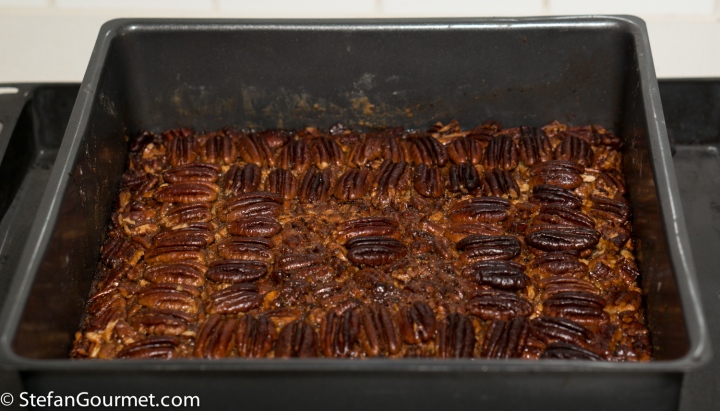 Bake at 190C/375F for half an hour or so, but make sure to take the pie out of the oven before the pecans burn (I was slightly too late). 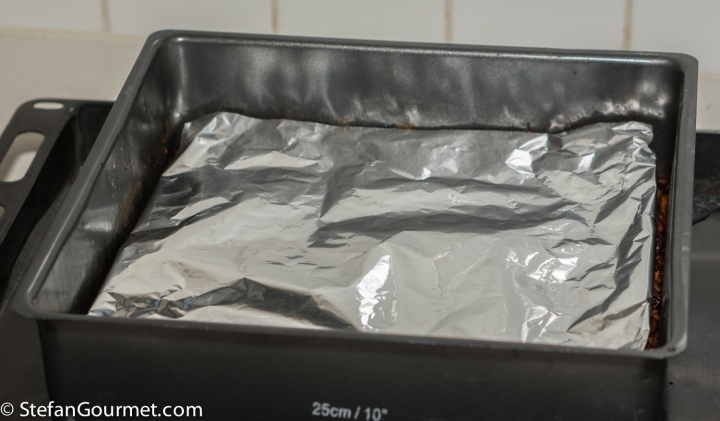 Cover the top with aluminum foil and return to the oven to bake until the filling has set (but still jiggles slightly), about 55 minutes total.

Allow the pie to cool to room temperature before cutting.

I can’t believe it’s more than two years ago already that I inaugurated Conor’s board with a wonderful bistecca alla Fiorentina.