Our discovery of Spanish wines continues in the denominación de origen Valdeorras, a bit more inland but still influenced by the Atlantic. The climate is between Atlantic and Mediterranean with significant vintage variation. Wet vintages such as 2014 are called “atlantic”, dry vintages such as 2015 “mediterranean”. Because this is a cool climate, the best vineyards are those facing the south and on slopes with good drainage and where the wind will dry the grapes. Other than the rest of Galicia, the soil here is slate rather than granite. In fact, 80% of the world production of slate (for roofs etc.) comes from this region. 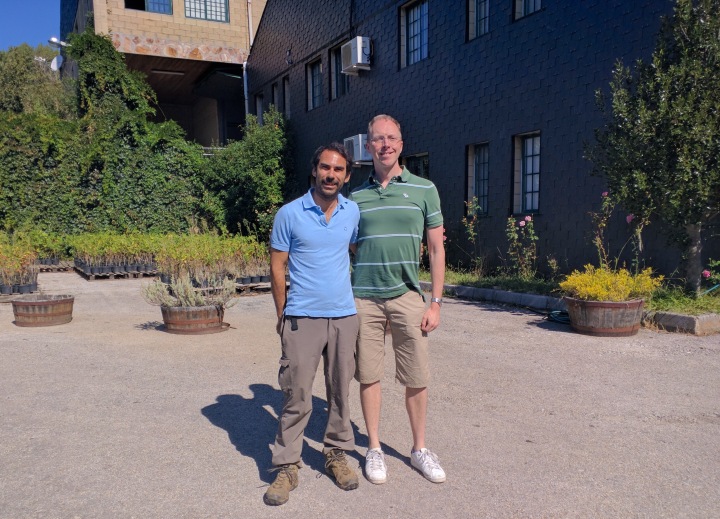 We visited the family-owned winery Valdesil in the valley of the river Sil near the villages of Corgomo and Portela. We were very grateful that owner and winemaker Borja Prada took the time to show us around during the busy harvest season.

In Valdeorras, like the rest of Galicia and northern Portugal, it was usual to make wines from a ‘field blend’. This means that different grape varieties are planted in the same vineyard, and that they are all harvested and vinified at the same time. The drawback of this is that different grape varieties ripen at different speeds, and so some grapes will be overripe and some underripe in a field blend. The same applies to the wine making, as different varities benefit from a different treatment in the cellar. In the photo above you can see a typical example of an old vineyard with bush vines. If you look closely (click on it to enlarge), you can see there are dark skinned grapes (mencía) on the left-hand side and light skinned grapes (godello) on the right-hand side.

In 1885, when the vineyard had to be replanted because it had been destructed by phylloxera, the great-great-great-grandfather of Borja decided as the first in Galicia to plant vineyards in a single variety and in rows instead of bush vines. That was unusual by itself, but his neighbors thought he was crazy when he chose godello to be this variety. It was known as a difficult variety because it buds early (risk of frost damage) and is sensitive to diseases. But he had noticed that blends with a lot of godello were the best. But with hard work he did get very good results and now climate change is helping because summers are less wet. Varietal wines of godello (and mencía) are now the trademark of Valdeorras and its neighbor Bierzo, and that all started in 1885.

Another innovation introduced by the Prada family is aging mencía in oak barrels. Borja’s father had been the president of a bodega in Rioja in the 1970s, and when he returned to Valdeorras he decided to take over two customs from that region: he built a new bodega designed by an architect, and started to age wines in oak barrels. The wines aged in oak are pressed with a manual press. The first vintage from the new winery and the new line of wines was 1991. Innovation continues at Valdesil. When vineyards have to be replanted because they are infected by trunk diseases, they are replanted with 5,000 vines per hectare and using the guyot system (both to increase the quality). That many vines per hectare is the highest in Galicia (and officially not even allowed yet in DO Valdeorras).

We tasted four wines. Unfortunately the oak-aged godello (Pezas de Portela) and varietal maria ardoña (also known as trousseau in Jura or maturana tinta) were sold out. All wines are very well made and offer outstanding value for money.

3 thoughts on “Valdesil: benchmark Godello and Mencía from Valdeorras”