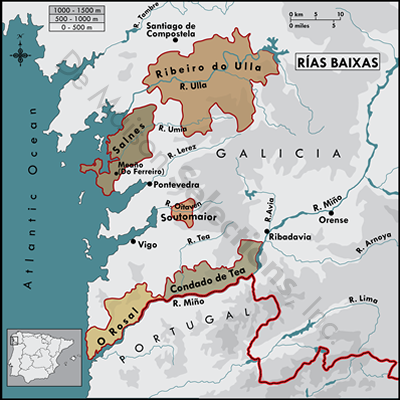 Rias Baixas is a wine region in the north-western corner of Spain in the autonomous region of Galicia, north of Portugal. The rias are inlets of the Atlantic that are a bit like shallow fjords. Rias Baixas, which should be pronounced as “ree-ass-by-shuss”, is best known for delicate, aromatic whites of the albariño grape (which in Portugal is called alvarinho). It is the wine region in Spain with the strongest Atlantic climate, and therefore wetter and cooler than the continental and mediterranean climates found elsewhere. Within Rias Baixas there are five subzones: Ribeiro do Ulla, Val do Salnés, Soutomaior, O Rosal, and Condado do Tea. The most characteristic is Val do Salnés, because it is the coolest and dampest and therefore the most elegant wines. Condado do Tea is the warmest subzone, so the wines are more powerful and less refined.

All the subzones are so wet that the vines are grown as ‘pergolas’, which shields the grapes from the rain and allows the wind to dry the grapes. The pergolas are supported by granite poles, as granite is the building material that is most easily available in the region (and it doesn’t rot because of the damp).

Because of its thick skin, the albariño grape is best able to resist mildew from the dampness. The thick skin and small grapes together with the manual harvest make wine from albariño more expensive.

The pergolas have another advantage, which is that the soil underneath the pergola can be used for other crops. Many of the plots are very small, because they were divided with inheritance, and often tended by part-time farmers. They sell their grapes to the wineries. It is a bit hard to see in the photo, but sometimes the vines are only on the edge of the plot with other crops in the center.

We visited three wineries in Rias Baixas, two in Val do Salnés and one in Condado do Tea.

Adega Eidos is a mondern winery in the town of Sanxenxo in the subzone Val do Salnés. The vines in the photo are trained as spaldera instead of pergola, but most of their grapes come from traditional pergola vineyards. The grapes are harvested and selected manually. The harvest is usually at the end of September or the beginning of October. 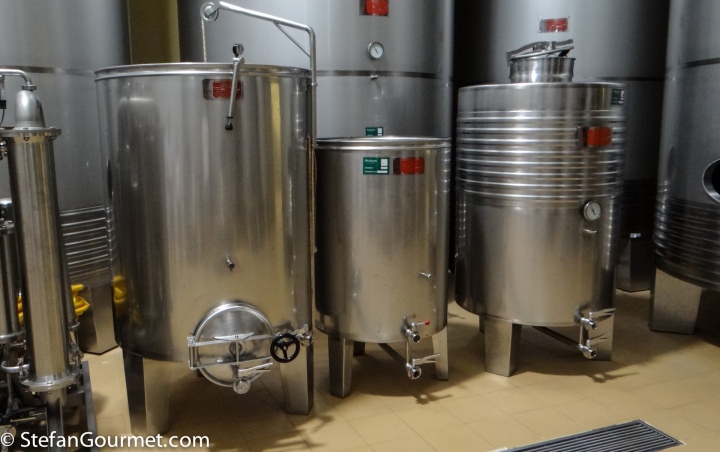 At Eidos all the wine making is done in stainless steel tanks. They produce three wines of 100% albariño, with cold fermentation and 12 hours of skin contact. 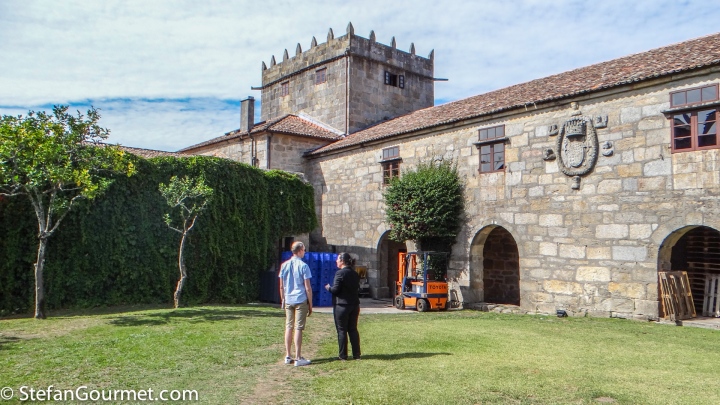 This winery was the first to make a 100% albariño in Rias Baixas in 1902, even before the DO existed. It is situated in a country mancion in the town of Cambados in the subzone Val do Salnés.

Fefiñanes are one of the few wineries that are succesful in making a barrel-fermented albariño. For this they use French oak from Allier, as only a light touch of oak is needed.

Other than that, they also use stainless steel to age the wines. Fefiñanes make three wines.

1583 Albariño de Fefiñanes 2015, price at the winery 17 euros; the wine has been named after the birth year of the original marques of the palacio, this wine has only been made since 2008

The final winery we visited in Rias Baixas is located near the town of As Neves in the subzone Condado do Tea, near the Portuguese border. The harvest of albariño grapes was being brought in while we were there. The bodega is new; the first vintage was 2006. It likes to keep the traditional wines of the area alive, which means that it doesn’t only produce albariño but also other local grapes such as treixadura, godello, loureiro, torrontés (white), mencía, pedral, and sousón (red). All the wines are made in stainless steel without lees to express the character of the grape variety. Because of the climate, the red varieties are difficult to ripen and will in most vintages have low alcohol.

This bodega is the only that makes a varietal pedral (which is also known as verdejo colorado or alvarinho tinto, but not a color mutation of either verdejo or alvarinho). Sousón is known as Vinhão in Minho in Portugal and used there to make red vinho verde.

It was very interesting to taste varietal wines that we had never tasted before. We tasted five wines.

9 thoughts on “Wines of Rias Baixas”