Lobster Thermidor is a classic French dish that I had not prepared before. Now I regret that, because it is really delicious and I will definitely make it again. As I am somewhat of an ‘adopted Italian’, I don’t tend to combine seafood with cheese. But in this case it definitely works, and the cheese doesn’t overpower the lobster. That is also because a modest amount of cheese is used. The dish was created in Paris in 1891 by the famous chef Auguste Escoffier. It consists of lobster meat served in its shell with a sauce and cheese gratin on top. As often with classic recipes there are some variations, such as using béchamel or cream, parmesan cheese or gruyère, including mushrooms or not, and the herbs and spices included.

The nice thing about this dish is that can be made with a fresh (live) lobster, but also with a frozen lobster that was already boiled before being frozen. With a fresh lobster the result can be better, especially if you cook the tail as shown below rather than boiling it. But with a boiled lobster the result is also excellent, and that may be easier to find than a live lobster. Here is my version of Lobster Thermidor. 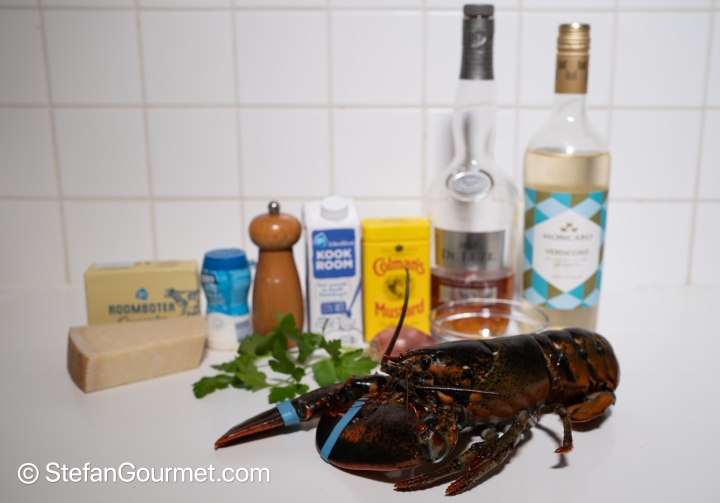 Serves 2 as an appetizer

Cut the lobster in half lengthwise. If you do this with a live lobster, start with the head so you will kill it instantly.

It is very difficult to get the raw tail meat out of the shell, so preheat the oven to 225C/440F… 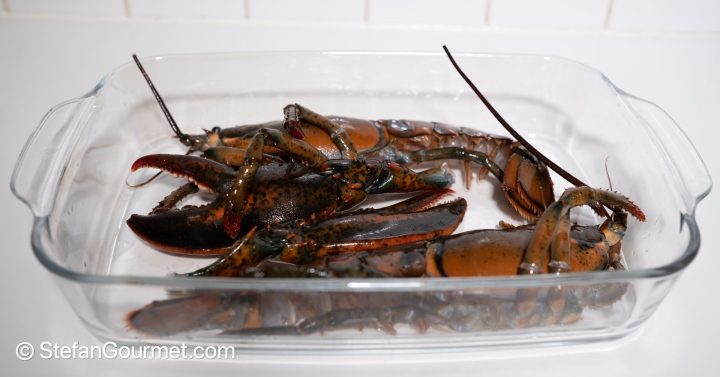 …and arrange the lobster in an oven dish, flesh side down.

Bake the lobster for 5 minutes, then remove the tails.

The claws need to finish cooking before you can get the meat out of them. You can either do this by returning everything but the tails to the oven for another 7 minutes, or by bringing some water to a boil, turning off the heat, and allowing the claws to steep in the hot water for 5 to 10 minutes, depending on their size. After that, allow the claws to cool in cold water. You can now (also if you are using a boiled lobster) remove the lobster meat from the claws, including the knuckles. Reserve the shells for serving the lobster.

Also reserve the lobster drippings that are left behind in the oven dish.

The tail will still be mostly raw, which is how it should be to get the best possible texture for the tail.

Melt 25 grams of butter in a frying pan. 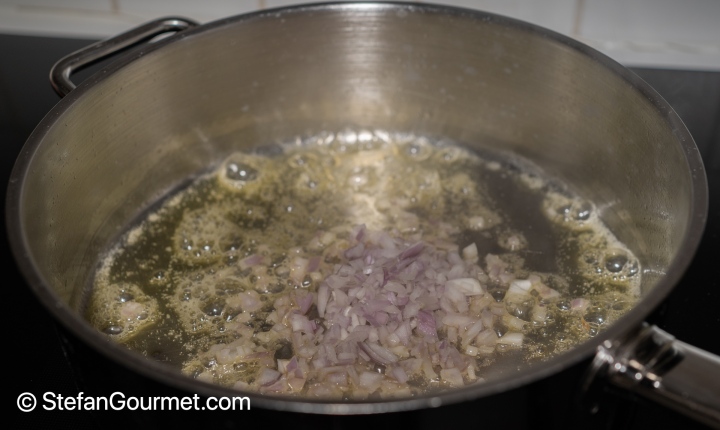 Cook the shallots over medium-low heat, stirring regularly, until they are soft and slightly golden. They should not become crispy or brown. 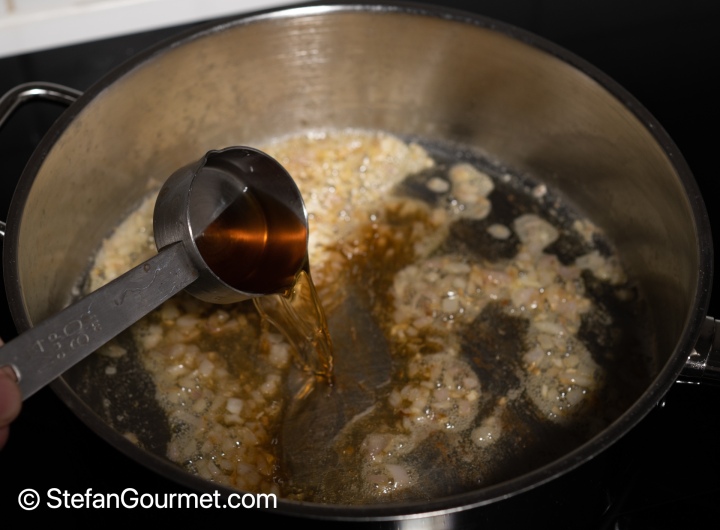 Increase the heat to medium-high and deglaze the shallots with 30 ml of cognac.

When the cognac has evaporated, deglaze with 60 ml of white wine. 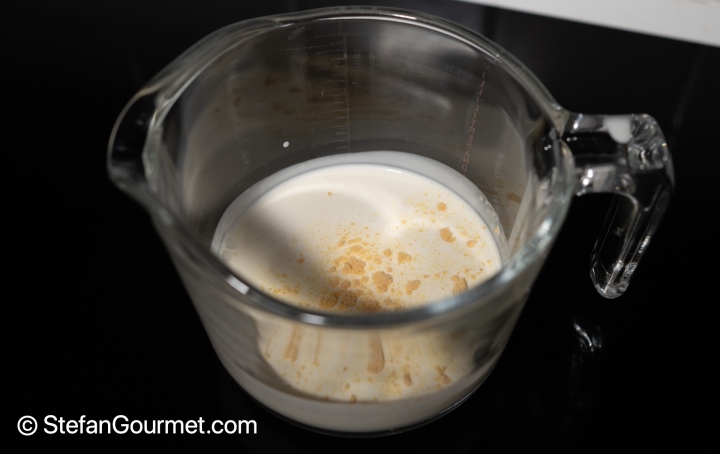 Stir until there are no more lumps. 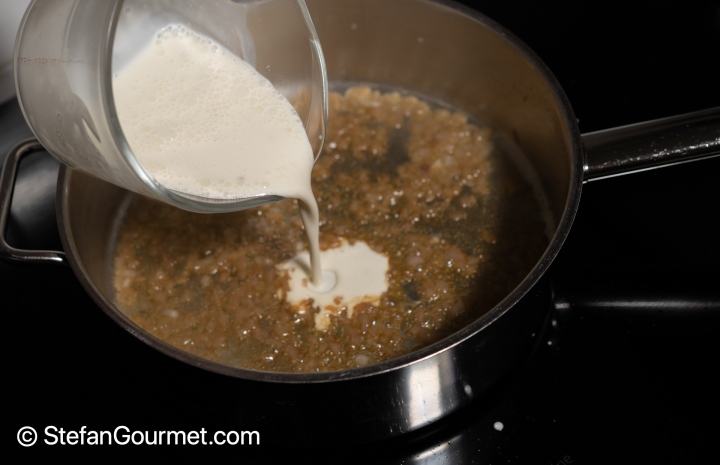 Add the mustard-infused cream to the shallots as soon as most of the wine has evaporated.

Add the reserved lobster drippings from the oven dish to the sauce. 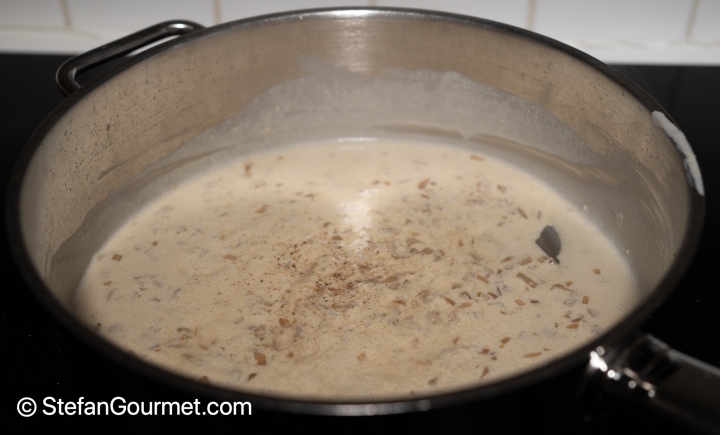 Allow the cream to reduce over medium heat, stirring regularly. When the sauce has thickened somewhat, season to taste with salt and freshly ground white pepper.

Turn off the heat, and add an egg yolk. Stir to incorporate the egg yolk. This will thicken the sauce.

Add a bit of minced parsley.

Stir and the sauce is ready.

Slice the lobster meat (tails, claws, and knuckles) and arrange it in a single layer in the lobster shells.

Put the lobster under a preheated broiler until the cheese is golden, about 5 minutes. This will also cook the tail meat. It is best to do this step under a very hot broiler (or in a very hot oven) to brown the cheese without overcooking the lobster. Serve at once.

This is great with a white Burgundy, or another complex and creamy (oaked) Chardonnay or other white such as Encruzado, Viura/Macabeo or Verdicchio.

Turbot is one of my favorite kinds of fish. It has a great texture and delicate flavor. In this simple preparation it is served with a mint sauce. Click here for the recipe.