Often simple preparations are the best. In this case a trout is wrapped in aluminum foil and baked in the oven, while potatoes are roasted in the same oven and with the same flavors (rosemary and garlic). The only tricky part is cooking the trout just right: too short and it will still be raw in the center, too long and it will be dry. I should have used a thermometer with a probe to prevent this conundrum, but I didn’t. If you are smarter than me, take out the trout when the center reaches 50C/122F.

I’ve cut the potatoes smaller and roasted them at a higher oven temperature than usual, based on the recommendation of CampariGirl. It worked very well, and if you like you could roast the potatoes even a bit longer to get them browned even more.

1 trout per person, gutted by the fishmonger

Preheat the oven to 225C/440F (fan forced). The potatoes need a bit longer than the trout, so start with them. Peel the potatoes and cut them into pieces of about 2.5 cm (1 inch). Toss them with olive oil in an oven-proof dish.

In the meantime, prepare the trout. Rinse under cold running water and dry inside and out with paper towels. Season inside and out with salt and freshly ground black pepper, and rub with extra virgin olive oil. Stuff the cavity with lemon wedges, garlic, and rosemary. Put each trout on a piece of aluminum foil…

…roll up the foil, and close the ends to seal. Make sure to rub the trout well with olive oil on the outside, so the foil won’t stick. 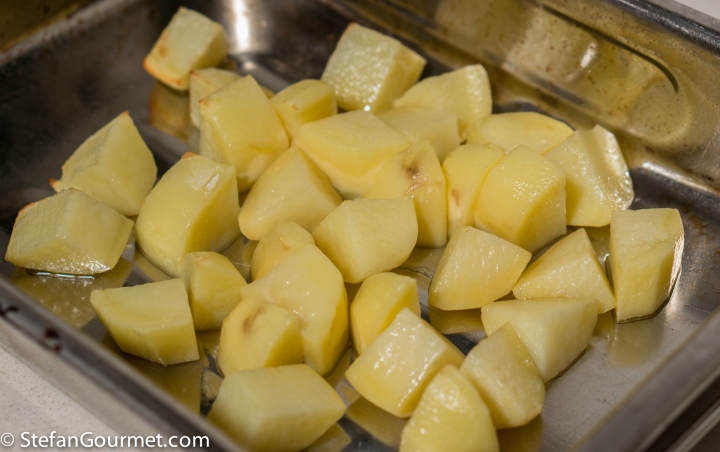 Take out the potatoes after the first 10-15 minutes. They will be lightly cooked. 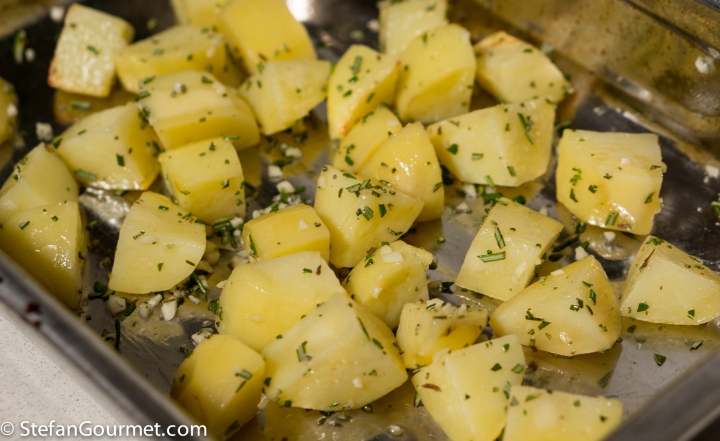 Continue roasting the potatoes until they are nicely browned (you could go a bit more than this if you prefer). In the meantime, bake the trout in the same oven for 15 to 20 minutes. As mentioned above, for best results use a thermometer with a probe and cook until the core reaches 50C/122F.

Serve the trout with the potatoes and a fresh lemon wedge. (I emptied the cavity before serving, but that isn’t strictly necessary.)

Indonesian food is very popular in the Netherlands, and one of the best known side dishes is spicy green beans.

24 thoughts on “Trout and Potatoes from the Oven”