Cooking an unfamiliar cut of meat sous-vide is always a bit exciting, as I am always looking for the perfect combination of time and temperature to make it as tender and juicy as possible. So I knew it was show time when I picked up a bolar roast (the Australian/New Zealand name for a cut that lies next to the ribs near the shoulder) of New Zealand farmed venison. Since this is farmed venison of young animals (not older than three years), I expected it to be relatively tender and decided to choose the lowest possible temperature of 55ºC/131ºF (going below that time would not be safe for longer cooking times) and a relatively short time of 8 hours. It worked like a charm: the meat was perfect. A longer time and/or higher temperature would turn it to mush. Here’s what I did, a very basic preparation that will allow the flavor of the venison to shine. 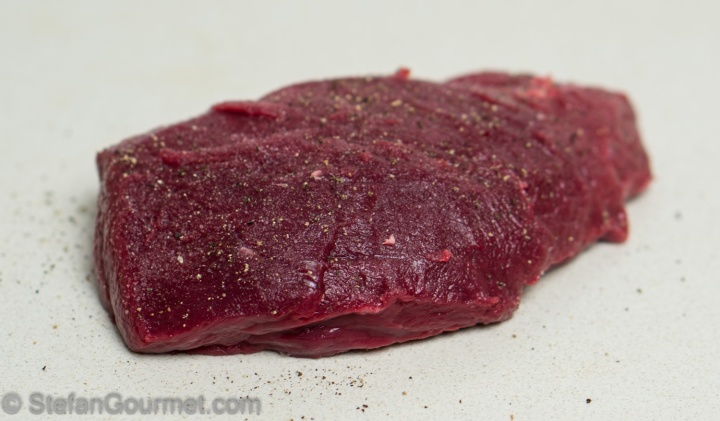 Season the roast with salt and freshly ground black pepper. 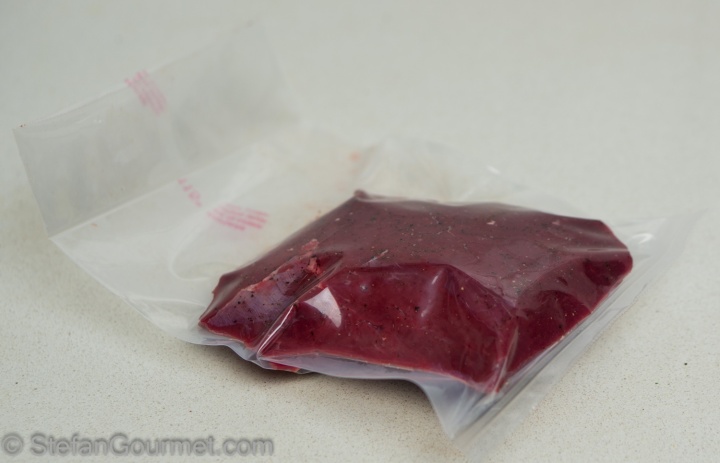 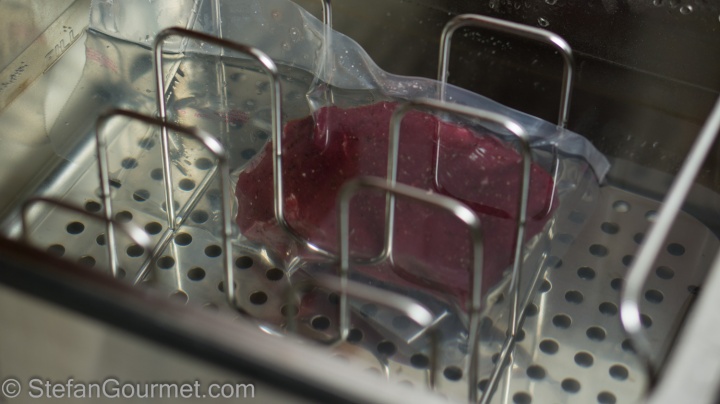 The meat does not look pretty after cooking, and despite the low time and temperature it has released quite a bit of juices. 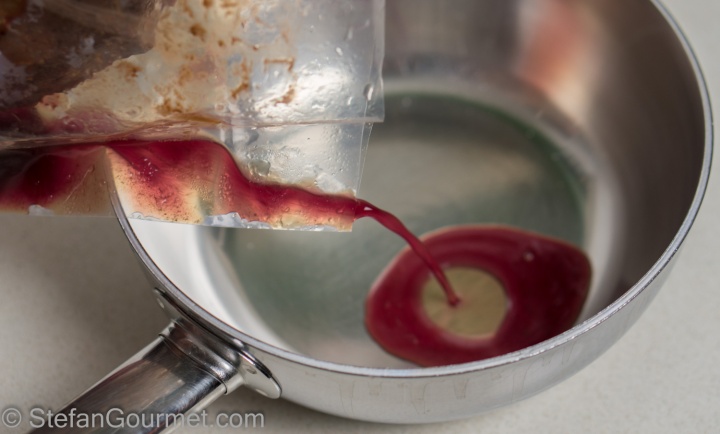 Pour the juices into a saucepan. 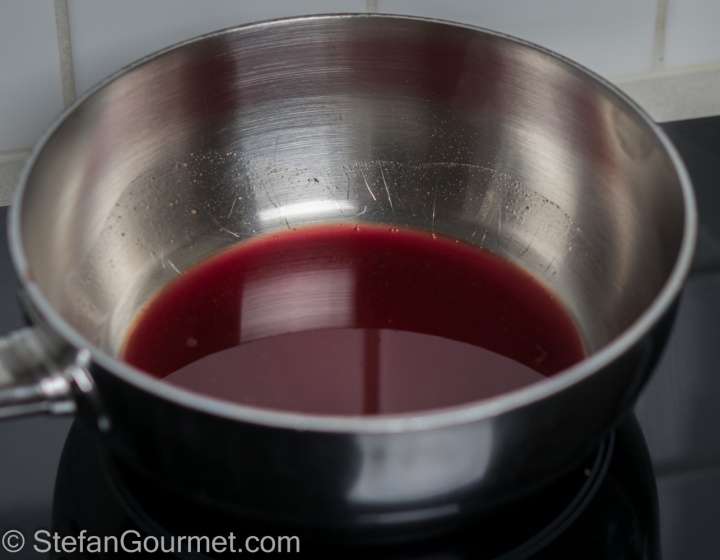 As the juices have only been cooked to 55ºC/131ºF, they are still ‘medium rare’, which means that the proteins in there have not set.

Bring the juices to a boil. The proteins will set and float on the surface as scum.

Pat the venison dry with paper towels. As long as the meat is wet, it won’t brown.

Brown the venison in clarified butter over very high heat. We don’t want to cook it as it is already cooked, just sear the outside to make it look better and to add some flavor. So just cook it until it is browned on all sides, a couple of minutes only. 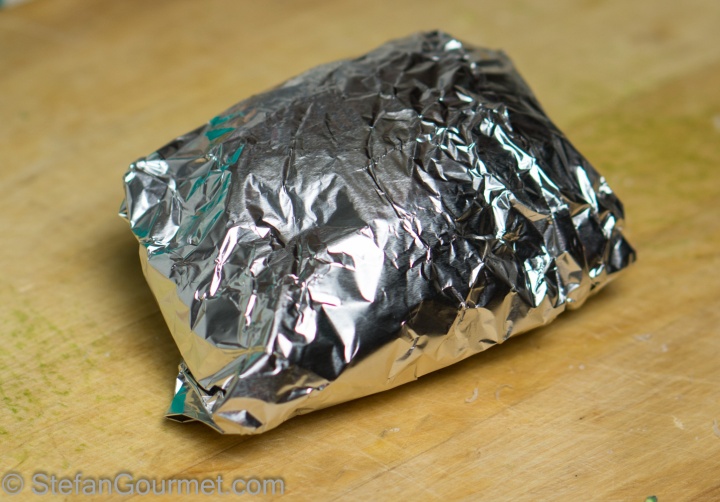 Wrap the meat in aluminum foil and allow it to rest while you finish a simple pan sauce.

Deglaze the pan with red wine, scraping with a wooden spatula to loosen any browned bits that got stuck to the pan and include them into the sauce for additional flavor.

Strain the juices into the pan through a fine sieve. Bring to a boil and allow to reduce.

When the sauce has reduced to your liking, turn down the heat to very low and add some cold butter in small pieces. Whisk to include and slightly thicken the sauce (this is called mounting with butter).

Slice the meat across the grain.

Serve the meat with the sauce. You may wish to sprinkle it lightly with salt. 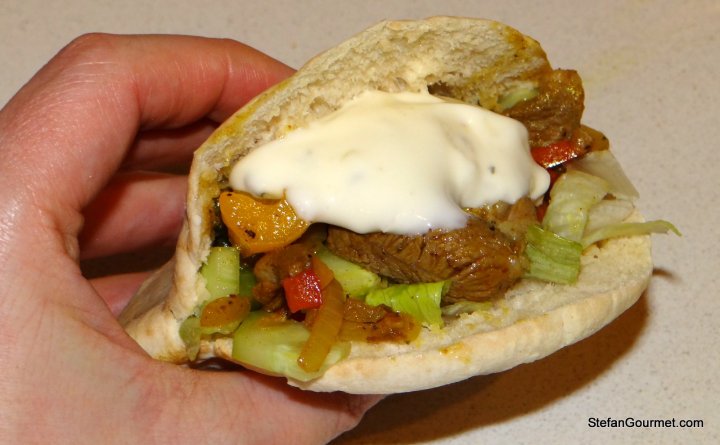 Shawarma (or shoarma as it is called in the Netherlands) is Middle-Eastern way of preparing meat with spices on a vertical spit, which is subsequently served in pita bread with salad and garlic sauce. It is a fast food staple around the world, and not something you’d expect to read about on a foodie blog such as this. Most places that sell shoarma in the Netherlands have their peak hours in the middle of the night on weekends, when people get hungry after having drunk a lot of beer. If you were the owner of a shawarma place and you were serving your fare mostly to customers who are too drunk to care, would you care about the quality of what you are serving?  I’ve had such a shawarma sandwich (broodje shoarma) on a few occasions, but never cared much for the soggy, greasy, overspiced and overgarlicked concoction with a taste that lingered way too long. Not surprisingly however, it turns out that if you make a shawarma sandwich from scratch, it is actually outstandingly delicious! And when I say from scratch, I really mean from scratch, including baking your own pita bread.